Kamerkoor Cantate is the first Dutch choir to be invited to participate in the prestigious international choir festival in Marktoberdorf, Germany, in June 2011.
Director Dolf Rabus and manager Sebastian Pflüger from Internationaler Kammerchor-Wettbewerb Marktoberdorf wrote:
"Congratulations! Your choir has been chosen for the 12th Marktoberdorf International Chamber Choir Competition! We are most happy to announce, that the supervisory committee has admitted your choir to the 12th Marktoberdorf International Chamber Choir Competition 2011.
Hans Oostendorp, Annie Bank Publishers' director, says about this:
"Usually some 15 choirs from every corner of the world participate in this competition, but you cannot simply register for it, saying that you wish to participate; on the contrary, you have to be invited for it! It is quite an honour, therefore, when you receive an invitation to participate! Now for the first time, a Dutch choir has been admitted to the coming 12th edition of the Wettbewerb this year and so they have every right to be particularly proud: Chamber Choir Cantate from Venlo directed by Dion Ritten."

Chamber Choir Cantate is a unique female choir founded by conductor Gerard Franck in 1970. It has been directed by conductor Dion Ritten since 2002. It may consider itself one of the Netherlands' best vocal ensembles. The choir works on quality and innovation in the field of female choral singing. Cantate is generally praised for its natural way of making music, excellent balance, purity, atmosphere and musicality. Whether it concerns secular or religious music, every single Chamber Choir Cantate's concert is an exceptional experience and the choir, therefore, can count on enthusiastic audiences and favourable reviews from the national and international choral world.

In 2010, Cantate celebrated its 40th anniversary with various activities. In May, the memorial concert '65th anniversary of the liberation of Venlo!' was performed. By order of the municipality of Venlo, Cantate contributed to the organisation of the event. In June, the choir organised the International Anniversary Concert together with the Swedish choir Voces Nordicea under conductor Lone Larsen.
Hans Braun, VNK-Limburg chairman (Association of Dutch Choral Organisations):
"It was a great evening. Top-class musically. And a relaxed atmosphere. Your guests were stunning. Organisation perfect!"
In October, Cantate, at Hans Braun's request, participated in the choral manifestation of the Southern Netherlands in Brussels as a representative of Netherlands-Limburg.
In addition, Cantate is not afraid to push out frontiers by performing in the theatre production "The World according to Leonardo da Vinci", directed by Stéphanie De Vriend. In June, they performed twice.
The anniversary year was concluded with a Christmas Concert. As usual every year, Cantate was invited for it by the Dominican Chapel Concert Platform to sing in Domani Venlo's concert series.

In the previous years, Cantate presented itself, for instance, at festivals both at home and abroad, winning various prizes. In July 2005, Cantate was declared winner of the finals of the Dutch Choir Festival and was awarded the title of Dutch Choir of the Year.
John Damsma, national chairman of the Dutch Choir Festival, wrote:
"Cantate may truly be considered a very worthy ambassador for Dutch choral singing."
National and international composers (Henk Badings, Gerard Franck, Vic Nees, Reijo Kekkonen, Imant Raminsh) composed works especially for Cantate.

In the past, several trips were made to the US, Italy, France, Slovenia, Belgium and Germany. In 2012, the choir will make a trip to England. Various contacts were made with choirs during these concert trips. Cantate likes to invite foreign choirs in the spring to organise international concerts in Venlo.
In 2006, Cantate presented its latest CD, Circles, which showcases dynamic and attractive choral music with a wide range of styles and composers. 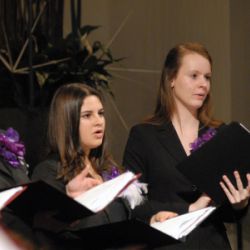 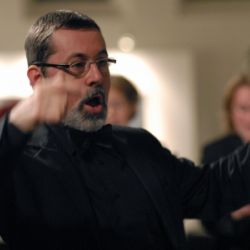 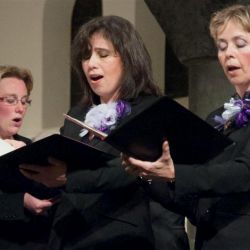 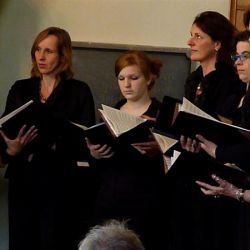 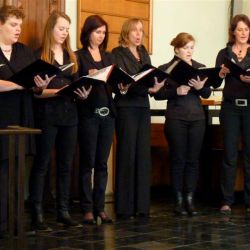